From WWE to Double Amputee 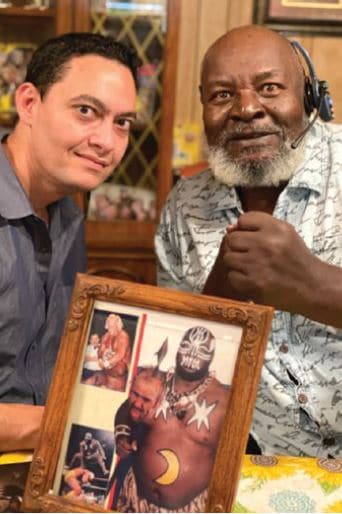 In the end, I lost both my legs, piece by piece, in six operations.” Hearing this will likely create imagery of a brave soldier losing both legs on a bloody battlefield, but this particular story is nothing of the sort. These six tours were spent fighting a disease on a very different kind of battlefield, but also against a ruthless enemy. This disease is slowly picking apart our population piece by piece, openly taking credit for destruction, but rarely held accountable for its actions. To stop this preventable terror, we must educate ourselves and unite as a society against this enemy.

Under Section 802 of the USA PATRIOT Act (Pub. L. No. 107-52) the definition of terrorism was expanded to cover domestic in addition to international terrorism. Although the definition was broadly established, two important types were left out: diabetes and obesity domestic terrorism. These two terrorist groups have organized into one group, one we now refer to as diabesity. Not only is it a domestic threat, with 83% of men and 72% of women predicted to be overweight in the United States in the year 2020 (based on the National Health and Nutrition Examination Surveys from 1988 to 2008), but diabesity has become a global pandemic. According to the World Health Organization, the planet Earth has seen the number of people with diabetes rise from 108 million in 1980 to 422 million in 2014, and it is the seventh leading cause of death worldwide. These devastating numbers should certainly be grabbing more headlines as well as the attention of more government bodies, health-care professionals, health-care payers, and, most importantly, the global community. Unfortunately, these astronomical numbers are largely ignored. Aided by the continued transition away from the traditional human lifestyle as well as corporate welfare, subsidies, and heavy government support of the sugar industry, the sedentary sugar-fueled insulin-resistant diabesity lifestyle eventually takes control of almost every physiologic and anatomic operating system of the body like a slow-moving cancer.

Despite improvements in modern medicine, rates of diabetes-related non-traumatic lower-extremity amputations are on the rise in the young and middle-aged population.3,4 The end result is a less functional, lower quality of life leading to a slow death and usually succumbing to one or more of the many chronic diseases affecting the microvasculature. These effects start to emerge as early as the teenage years, with type 2 diabetes in youth having a higher risk of complication than youth with type 1 diabetes.5 With millions affected and few brave enough to speak up, I share with you an incredible story and journey of a man who, piece by piece, went from being a celebrity in sold-out stadiums to losing his professional career along with his body parts, and even his freedom, to this insidious terror.

“If, by telling his story, he can help prevent unnecessary amputations, then he feels he is accomplishing something much more positive in his life.”

THE STRUGGLE IS REAL 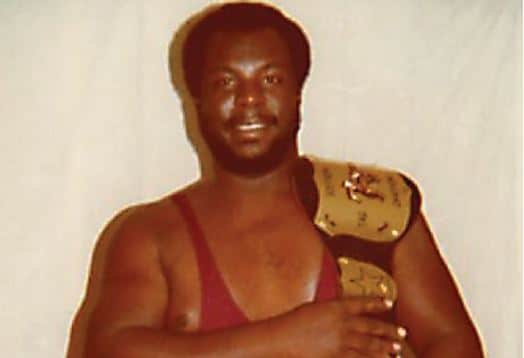 This is a story of a male African American professional wrestler, though his story is representative of any person, unrelated to sex, age, race, or occupation. Through his vulnerability, we will all share in the possibility that we may also have to fight this disease. If you saw our hero now, sitting in his electric scooter inside his modest home in Senatobia, Mississippi, sidelined by diabetic gangrene and bilateral above knee amputations, you would not envision that his history was that of a professional wrestler who fought against the likes of Hulk Hogan, Andre the Giant, Ultimate Warrior, or the Undertaker in front of 80,000 screaming fans at Wembley Stadium in London.

Whether or not you are a wrestling fan, you can appreciate the magnitude of performing in front of a very large crowd in the same stadium where only months earlier the Freddie Mercury Tribute Concert drew an audience of 72,000. In case you were wondering, the Intercontinental Championship Match that year was won by the hometown hero, the British Bulldog, with Lennox Lewis, heavyweight boxing champ of the world, in his corner to beat his brother-in-law, Bret Hart. I grew up entertained by professional wrestling, and now I am sitting with this larger-than-life character at his dining table in a small town in Mississippi. Although he is deserving of the WWE Hall of Fame, I believe his true achievement derives from wanting to rise up and raise the awareness of a devastating disease by sharing his story to help others. This is a story about a preventable terror of a disease called diabetes leading to end-stage peripheral arterial disease (PAD). This disease is distinguished by blockages in the leg arteries, ultimately causing non-healing foot ulcers which lead to amputation. This killer of a disease is better known as critical limb ischemia (CLI), and those dedicated to eradicating it are known as amputation prevention specialists.

“I got 99 Complications, and Amputation is One.”
– Diabetes 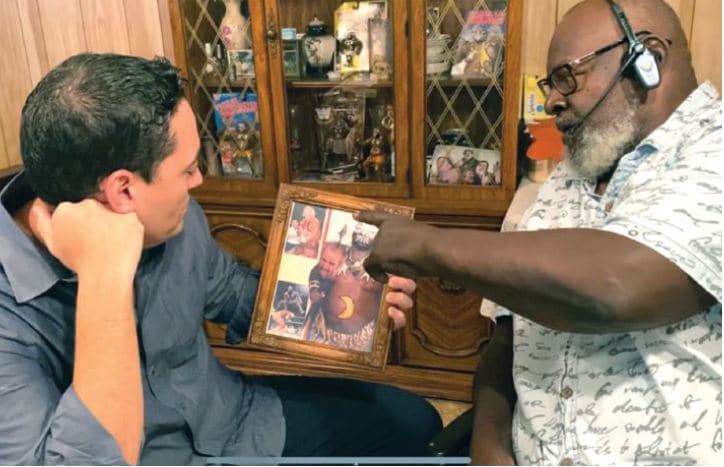 “If, by telling his story, he can help prevent unnecessary amputations, then he feels he is accomplishing something much more positive in his life.”

To physicians, nurses, wound care providers, and all those involved in the treatment of patients with chronic complications of diabetes, this story sounds all too familiar. This leads us to the reason why James “Kamala” Harris graciously agreed to do this interview — because “it doesn’t have to be like this!” James Harris arrived at that simple conclusion, which thousands of years of diabetes research agrees with; that, if well controlled, not ignored, and proactively managed; diabetes could be contained as a threat rather than an attack on his limbs and life. Prior to having his first amputation, Kamala had to go on hemodialysis for kidney failure. He explained, in a soft, now slowed-down, and more distant tone, how he would begin noticing that his friends at the dialysis center developed leg ulcers which would become infected. They would begin to randomly miss sessions until they wouldn’t show up again at all. When James would ask about them he would be simply informed that they had passed. Watching this happen over and over again made him realize that there was a predictable slow pattern to what he was observing. Whether through a stealth or “shock-and-awe” attack, diabetes follows the same battle plan over and over again, regardless of its victim, launching a motor, sensory, and autonomic neuropathy attack. This causes its victims to slowly develop foot deformities in feet they can’t feel, which become dry and cracked after losing the ability to sweat properly, leading to callus formation. This repetitive cycle of trauma makes one prone to ulcer formation which can become infected. If one has a lack of blood fl ow to the area, the risk of losing the limb is always present. He felt that being taken apart limb by limb, piece by piece, like one of the WWE wrestling action figures he showed me in his home, until you “didn’t show up for dialysis anymore,” could have been prevented. Although mostly housebound now without access to a handicap vehicle, and still with some serious upper body size on him, Kamala remains the gentle giant he was behind his character’s painted mask. He was such a nice person throughout his career that the mask and his character’s lack of speech were necessary to facilitate the Kamala act. Otherwise, “Sugar Bear” was too nice a guy to be an entertaining wrestler and convince you he could be a savage beast. All his life he had to overcome obstacles and adversity, from growing up on a sharecropping farm in Mississippi during the civil rights movement to being one of the first black professional wrestlers to tour in wrestling. If, by telling his story, he can help prevent unnecessary amputations, then he feels he is accomplishing something much more positive in his life. 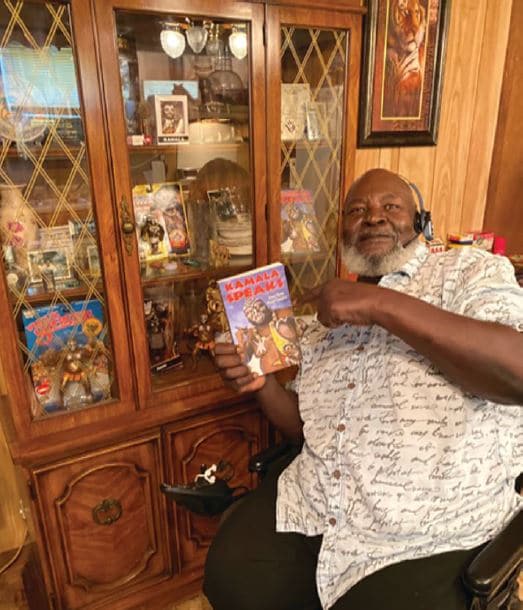 James Harris realized in hindsight that preventable problems required a completely different approach than the one he wasn’t given a chance to refuse. Had a friend, nurse, or physician been available to educate and warn our friend James “Kamala” Harris that his diabetes was causing the loss of sensation in his feet while fighting barefoot in the ring as a “Ugandan Giant,” he would have made alternative choices which may have spared his limbs. One incredible story he was able to share with me was that he was forced by the WWE, under the threat of fines, to remain barefoot during matches even after he began developing diabetes-induced peripheral neuropathy.

If kids could relate to a childhood hero urging them to understand that processed sugar is their enemy instead of a seemingly harmless and colorful friend, it could turn the tide against the diabetic terror threat by protecting feet, preventing amputation, and saving lives.

I would like to thank James “Kamala” Harris for his courage and humility in sharing his life story to help others who are at risk or are sharing a similar path. The domestic and foreign terrorist threat of diabesity is real, but society, the media, and medicine unfortunately are not doing a good enough job in educating at the children’s and people’s level. I chose to publish the story in this journal dedicated to CLI and amputation prevention because this publication is supported by the patient-centric CLI Global Society and founded by a call to action to end preventable amputations. As Henry Ford eloquently stated, “Coming together is a beginning, keeping together is progress, and working together is success.” Together we need to stand against the world’s scariest pandemic of diabesity and join James “Kamala” Harris in saying “No to Amputation.”

Paul Michael, MD, FSCAI, is an Advanced Cardiac and Vascular Disease Specialist at Palm Beach Heart & Vascular in Lake Worth, Florida. He can be reached online at www.palmbeachheartvascular.com

An article from the March 2020 Journal